Earth is older than we can consciously conceive. The latest age estimates are about 4.5 Billion years. That’s a long time. During its multibillion-year journey thought the Milky Way galaxy and around our solar system, the Earth’s polar axis of rotation has become inclined to the plane where the Earth and other planets orbit the Sun (that plane is call the Ecliptic). This axial incline, about 23.5º, is primarily attributed to the gravitational pull of the Sun and Moon on Earth over time. Fortunately, that titled axis happens to be critical to our experience of the seasons and contributes significantly to the patterns of life. The next winter you hear someone singing “White Christmas” while it’s snowing in Vermont, don’t forget to thank the Earth and its tilted axis for that experience. 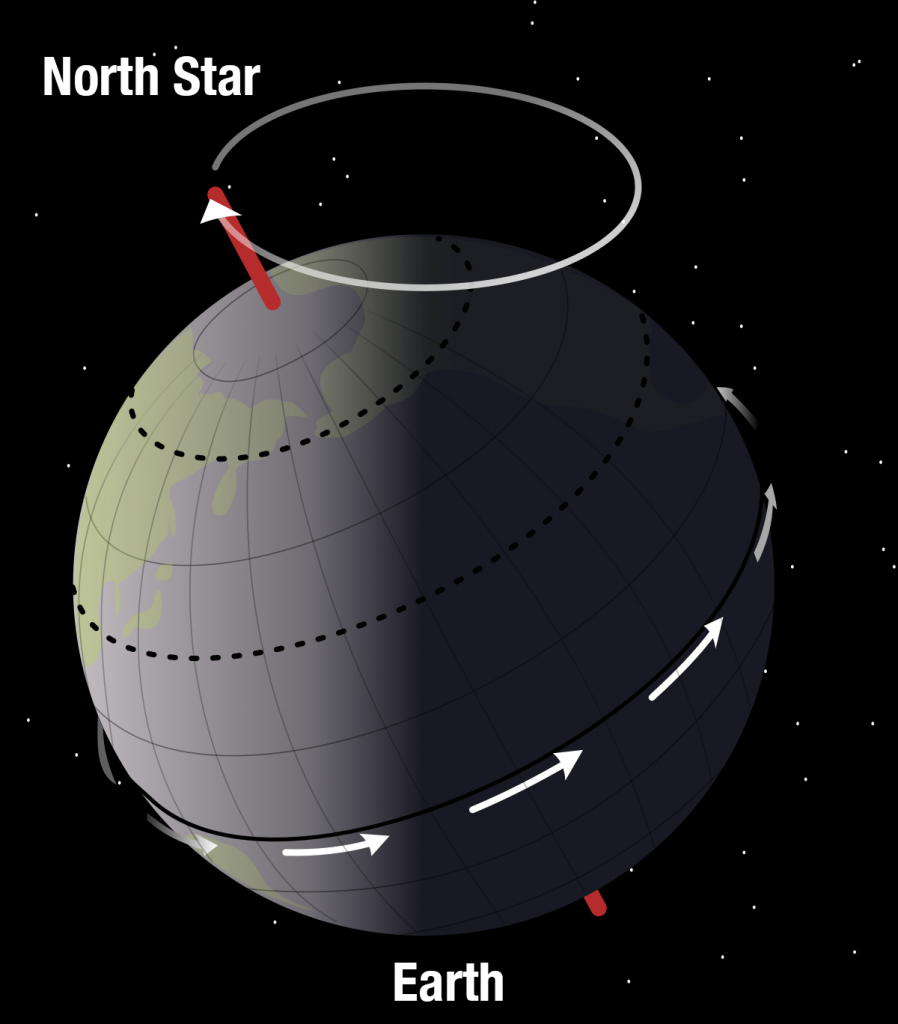 The Earth’s axis always points in a specific direction into the starry dome residing above us. Currently, in the Northern Hemisphere, the Earth’s axis or true north pole points very close to the “North Star” which is named Polaris. As the true north pole continues to wander over time, effectively tracing out a circle in the heavens, it will point to many different stars, allowing each to play the role of the North Star in our astronomical history.

If we could speed up the Earth’s motion forward (or backward) in time, we’d see a slow, top like rotation of the axis that creates that circle. The best estimate for measuring the period of this rotation, the Earth’s axis inscribing one complete imaginary circle in the heavens, is about 25,772 years. This axial motion is often referred to as the “precession of the equinoxes” or simply precession. From our perspective on Earth, it manifests as the slow, steady westward travel of all the stars, constellations and zodiac. 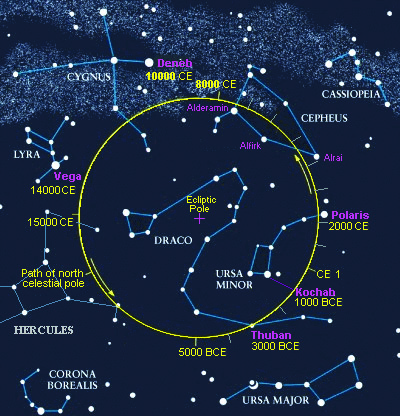 Changing only about 1º every 72 years, it’s extremely hard to notice this movement with the naked eye. But, if we could observe the effects of precession over time in the same area of the sky, we’d see a gradual change in the position of the stars, constellations and zodiac. Everything would be slowly moving. For example, in the Northern Hemisphere, if we were to jump ahead 12,000 years into the future, the constellation of Orion would be overhead at night in the summer months. That’s almost 180º from its current wintertime position overhead at night. So, why is this astronomical observation about the Earth’s axis movement significant for astrology?

TROPICAL AND SIDEREAL SYSTEMS OF ASTROLOGY

In western astrology, there are primarily two systems used to interpret the position of the zodiac band of signs relative to the sky; tropical and sidereal astrology. Each astrological system defines the position in a zodiac sign (specified in degrees, minutes and seconds) of planets, points or any location on an astrological chart. A planet’s astrological position described using either the tropical or sidereal system is a human invention, the planets don’t care. Yet, it’s interesting to examine what produced these two astrological systems.

Traditionally (way before computers), all the calculations that astrologers had to do to generate a chart were challenging. To include a mathematical term that accounts for Earth’s precession, affecting every position in a chart, was adding another consideration for astrologers. There would be a number of questions to ask.  When do you set the start date to determine the calculation? What rate of precession do you use? How accurate is your choices and observations of precession?

Over time, precession produces drift of an axis. If we consider the shift of the Earth’s axis that’s occurred over the last 2000 years, it totals almost 27º, which is practically an entire zodiac sign of shift! There is also the concept of the seasons and natural cycles of the Earth that were mated in antiquity to the astrological signs, which were originally connected to the corresponding constellations. Those traditional relationships would also drift over time. How do you address this challenging situation? These factors, and others, contributed to the eventual adoption of the tropical system of astrology throughout the west.

Tropical astrology, which is tied closely to the Earth’s recurring seasonal cycles (primarily the spring equinox), is the dominant method of chart interpretation used in western astrology. Since it was first used over 2000 years ago, each year on the Vernal Equinox (usually around March 21st), tropical astrology “resets” the starting point of the zodiac so that its initial position corresponds exactly to 0º Aries. When you hear western astrologers talk about the position of a planet, such as saying “Jupiter is at 9º Libra”, they are referring to the tropical zodiac position of 9º Libra for the planet Jupiter. But, if you looked up into the night sky, the Earth’s axial drift produced by over 2000 years of precession, Jupiter would likely not visually be in the constellation of Libra. In fact, Jupiter would seem to reside in the constellation of Virgo.

It’s important to recognize that tropical astrology essentially disconnects the signs from the constellations. However, being intimately tied to the cycles of the Earth’s seasons through a reset occurring at the spring equinox, tropical astrology tells us clearly about how we interface with the outside world, its cycles, and how others interpret our actions and motivations. That’s no small quality to be ignored.

In contrast, sidereal astrology corrects for the precession of the Earth, the signs more or less remain aligned with their constellations. It repositions the zodiac band in the sky as it was initially established during ancient times. Sidereal astrology harkens back to the inception of western astrology over 2000 years ago when the sign positions corresponded closely to the constellations, where they were conceived. For instance, the physical star constellation of Leo would actually match up more directly with the 30º span of the sign of Leo in the zodiac. This means with sidereal astrology you’ll see a more direct correlation between a planet’s position in the sky and the sign it is astrologically said to be in. If you say “Saturn is in Capricorn”, when you look up in the night sky, the planet Saturn would likely visually reside within the constellation of Capricorn, its sidereal position. Astrological data produced by the sidereal astrology system sets zodiac positions that more or less match up to the signs, which also happen to correspond to constellations.

The usefulness of sidereal astrology is apparent for a number of reasons. For example, given a known degree position in the zodiac, the correlation between a constellation and a sign makes it easier to look into the night sky and quickly contemplate the current astrological conditions (just like in the ancient days, when astrology charts were a luxury). Also, a sidereal based interpretation of a natal chart, which employs the same astrological archetypes used in tropical astrology, seems to consistently relate more directly to the internal or psychological state of an individual. This last fact is REALLY significant as it has been documented and reported repeatedly by astrologers!

THE DIFFERENCES BETWEEN TROPICAL AND SIDEREAL ASTROLOGY

So, we can use tropical astrology to examine our relationships with people, places and things in the external world, as well as how we outwardly project our qualities to others and how they see us. Meanwhile, the patterns of sidereal astrology seem to delve more easily and deeply into the fabric of our internal dialog, what we are thinking on the inside. It conveys an awareness of the intimate side or inner vibrations pertaining to our impression of our relationship with the outside world.

Restated, tropical astrology ties us more directly to the cycles of Earthly life and reflects how we are perceived by others, while sidereal astrology emphasizes how we feel on the inside, allowing us to explore our inner motivations, intentions and emotions about external events. So, for any given situation, you can use both tropical and sidereal astrology to arrive at a diverse perspective or interpretation of an individual’s natal chart. That’s great, but what about this precession thing, how does it relate to sidereal astrology?

HOW DOES PRECESSION RELATE TO ASTROLOGY? (CALCULATING SIDEREAL DATA)

In order to make the calculation of the sidereal astrology position of a planet, point or other location in a sign, we need two things; 1) agreement on a rate for precession, and 2) the selection of an appropriate starting or reference point in time to determine the degree adjustment. This last factor is typically taken from a significant event in astrological history, such as knowledge of a specific star sitting on the horizon or ascendant during the vernal equinox, creating a historic reference point.

WHAT IS AN “AYANAMSA”?

The term often used to identify this calculation or the astrological system used to generate positions on a chart is “ayanamsa” or “ayanamsha”, a word borrowed from Vedic astrology. Over the years, astrologers have developed numerous schools of thought about the most appropriate ayanamsa to use in calculating positions in sidereal astrology. In my astrology consultation sessions, which are heavily integrated with sidereal astrology data, I use what is known as the “Fagen-Allen” ayanamsa. To date, I have found this system to be consistently useful in my astrology work.

The use of sidereal and tropical astrological systems together in an astrology consultation session allows a full spectrum of internal and external information to be accessed and interpreted. Employing both systems in my sessions provides me with the most diverse and accurate astrological data possible when addressing a client’s needs.

One reply on “Precession, what is it? Tropical and Sidereal Systems of Western Astrology”

[…] In a previous article Precession, what is it?, I discuss the impact on our perception of the heavens produced by the Earth’s axial movement. […]